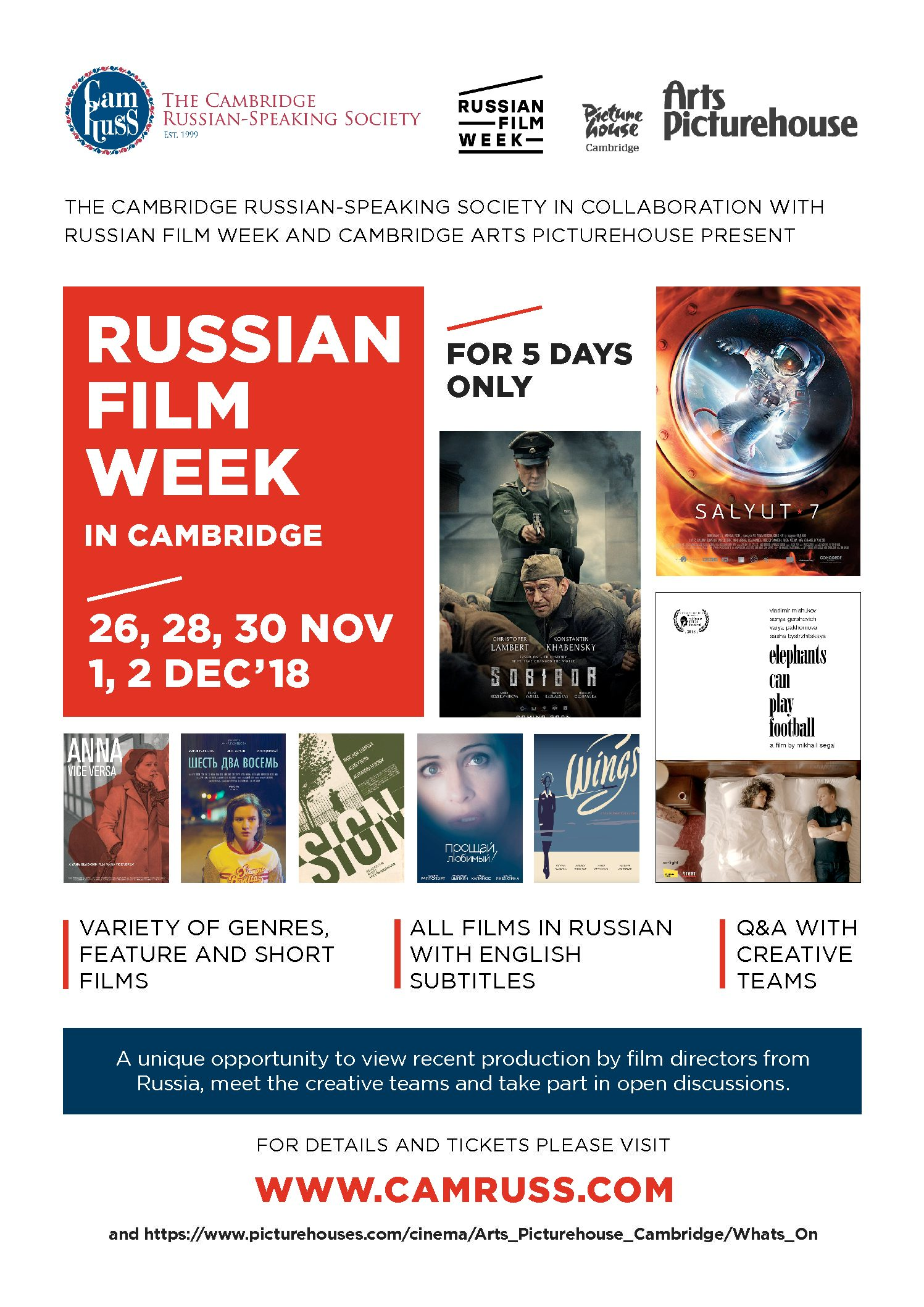 A unique opportunity to view recent productions by film directors from Russia, get acquainted with young talents and acclaimed actors, meet the creative teams and take part in open discussions. This is the third annual Russian Film Week in Cambridge organised by the Cambridge Russian-Speaking Society with the support of Russian Film Week and, this year, with Cambridge Arts Picturehouse.

The artworks presented will explore common human themes of love, happiness, memory, loyalty and betrayal. These films are made by established and up-and-coming cinematographers. There are different genres to choose from: a space odyssey, love story, a historical drama based on real events (and Russia’s entry into the Oscars in the best foreign film nomination) and short films selection.

Screenings will be held at the Cambridge Arts Picturehouse and two other conveniently located venues in central Cambridge.

For more information and the detailed programme please see below.

You can also listen to an interview with one of the key organisers Yelena Karl here: Bums on Seats Cambridge 105 Radio (the interview starts 13:20 minutes through the podcast).

With any questions please email events@camruss.com Awards: the Golden Eagle award in the main nomination “The Best Film”, the prize for the best editing of the film, the NIKA award for “The Best Cinematography” in 2018.

Based on real events. USSR, 1985. On February 11, 1985, the Soviet orbital station Salyut-7, which has been in orbit in unmanned mode for the past six months, unexpectedly loses control and stops responding to signals sent from the Flight Control Center (FCC). A possible fall to Earth of the station, the pride of Soviet science and Space program, may result in not only a loss of the country’s reputation, but also in a tragedy since it could fall anywhere on the planet and destroy any object and even a city. All this happens during the “cold war”, which further complicates the unpredictable situation.

In June 1985, after three months of training, the FCC management sends to the orbit a specially equipped manned spacecraft Soyuz T-13 with a crew of two of the most experienced Soviet cosmonauts at that time. Ship’s commander Vladimir Dzhanibekov and flight engineer Viktor Savinykh are confronted with the most difficult and risky task: to find the “dead” station; catch up with it without colliding, to carry out in outer space the most difficult manual docking with a moving uncontrolled spacecraft (which no one has ever done before in the history of world space exploration); check the condition of the onboard systems and station equipment; identify the causes of problems and prevent a catastrophe.

20:00 Q&As with the director Klim Shipenko Synopsis: Dmitry is a strong-willed kind of guy. He could easily quit the game, if only he knew that he was playing.

Mikhail Segal is a director, screenwriter, composer, writer and producer. He represents a new school of film making in Russia, exploring the inner relationships, hopes, ideals and drawbacks of contemporary Russians. Mikhail’s psychological dramas are full of wit and hope and have become a firm favourite with people all across Russia.
Mikhail Segal studied at The Russian Federation State Institute of Cinematography (VGIK) in Moscow and started his career as a film director in advertising (for Audi, Mitsubishi, Panasonic, LG, Ariel, IKEA, Pepsi, etc.) and video-clip making for Russian rock groups. His full-length debut “Franz+Polina” (2006) received recognition at a number of Russian and international film contests, including the XXVIII Moscow International Film festival. He has published three collections of prose.
His second feature film “Short Stories” (2012) enjoyed great success among Russian viewers and received the prize for Best Script and a Diploma of the Guild of Film Scholars and Critics at Kinotavr, the main film festival in Russia, followed by “Film about Alexeev” (2014) and, this year, “Elephants Can Play Football”, which, recently released in Russia, has been receiving excellent reviews from both film critics and viewers. The film is based on the story of the Sobibór extermination camp uprising during WWII led by the Soviet officer Alexander Pechersky. Whilst a POW in Sobibor, managed to do the impossible – to organize a revolt and mass escape of the prisoners. Some escapees were later caught and executed, the rest led by Pechersky managed to join the partisans. This is the story of the power of the human spirit resisting the soulless destruction machine. Based on the book by Ilya Vasiliev: “Alexander Pechersky: Breakthrough to Immortality”.

This film is Konstantin Khabenskiy’s directorial debut and Russia’s entry for the Oscars in the best foreign film category this year.

The film will be presented by Dr John Barber.

20:30 Discussion after the screening. Love is on everyone’s tongue. Two buskers travel from Mytischi to Moscow on a train, sing and discuss life and the wife of one of them. Anna gets an anonymous bouquet which turns her life upside down. But instead of finding love, she finds herself on a railway track. Anna Karenina of nowadays? Sasha is 18 years old, in love with her roommate and passionately hates her roommate’s boyfriend, Egor, who lives in their room illegally. More than anything else Sasha dreams of getting rid of Egor. She doesn’t know yet that sometimes a dream coming true is the worst thing which can happen. The collapse of the USSR did not pass without bloodshed. In some republics, including Lithuania, there were clashes between the local civilians and the Soviet military. The drama takes place in a Soviet plane. The stewardess is trying to save the board from the terrorist and, at the same time, her marriage. A couple struggles to find the way to their happiness after years of relationship. Perhaps the most honest account of feelings by a woman whose husband leaves her for a younger mistress.

TICKET PRICES AND BOOKINGS FOR ALL THE ABOVE:
ONE screening: Fri, 30 Nov or Sat, 1 Dec ONLY
Adults: £10;
CamRuSS members, students, OAPs: £5

Alternatively, you may book your tickets for screenings on Fri and Sat ONLY by bank transfer

IMPORTANT NOTICE! DUE TO TECHNICAL REASONS THE SCREENING WILL BE HELD IN MAIN LECTURE THEATRE IN ST JOHN’S COLLEGE OLD DIVINITY SCHOOL. Life seems to have frozen in the 90s in this remote Russian town.  After a failed attempt to “make it in Moscow” Mila decided to return to her mother’s house to heal the wound of her soul. Meanwhile, her sister Galya is getting married to Rustam, a handsome young man from Central Asia who becomes the cause of new passions. A terrible epiphany awaits the participants of this family drama.

The film is based on the play Clay Pit by Olga Pogodina-Kuzmina.

Alternatively, you may book your seat and donate for this special screenings by bank transfer