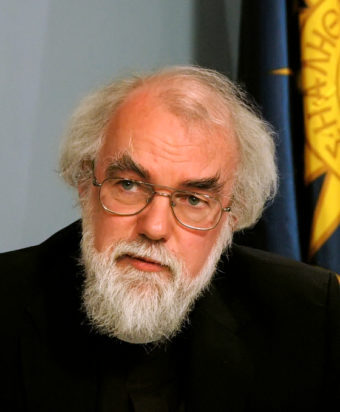 Dr. Rowan Williams is widely known as a recent Archbishop of Canterbury – he held the office from 2002 till 2012. At present, he is the Master of Magdalene College, Cambridge, and chair of the board of trustees of Christian Aid.

However, it is probably somewhat less known that Rowan Williams is a philosopher and a poet, and has profound interest in great Russian novels (Dostoevsky’s “Brothers Karamazov” and “Demons”, and Pasternak’s “Doctor Zhivago”, to name but a few) and Russian religious philosophy, in particular Sergey Bulgakov. He recalls:

Dr Rowan Williams has strong Cambridge connections. He read theology at Christ’s College, Cambridge; worked as a tutor, chaplain and Director of Studies at Westcott House (1977-1980), and then served as a parish priest at St George’s Church in Chesterton (Cambridge) in 1980-1983, until he was appointed as a Lecturer in Divinity at Cambridge University. In 1984-1986, he was Dean and Chaplain of Clare College, Cambridge, and recently, having retired from the office of Archbishop of Canterbury, Rowan Williams returned to Cambridge to become Master of Magdalene College.

Entrance: CamRuSS members free, students £3, others £5
(no need to book – please pay on the door)
The talk will be followed by refreshments (juice, wine and nibbles) and an informal discussion.

Everyone is very welcome!